The August meeting of Withiel Parish Council was enlivened and accelerated by the presence of Roche Brass Band, which had hired the Village Hall for practice and kicked off a serenade that threatened to swamp discussions in the committee room. We managed to conclude the business before they progressed beyond the tuning stage – either that or they were practising Stockhausen.

The Parish Clerk Robin Turner had managed to ferret out from the people in charge of the roll-out of broadband in Cornwall their plans for extending the service across Withiel. In answer to questions about specific PL30 postcodes, Superfast Cornwall said END_OF_DOCUMENT_TOKEN_TO_BE_REPLACED 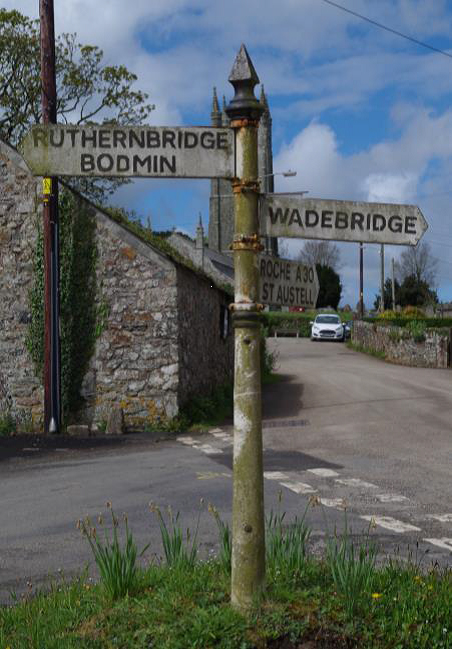 The strange and bewildering story of the BBC and Withiel’s treasured signpost was set out at the February meeting of Withiel Parish Council, where it was explained that hopes had been raised, then dashed, that the historic but deteriorating fingerpost would be refurbished at no cost to the Parish.

Councils in Cornwall had been contacted by the makers of a new BBC2 series called ‘The Repair Shop’ who were looking for interesting items of sentimental value which could be repaired by their team of experts. They particularly specified community items such as statues, weather vanes, sundials or carvings that might have special meaning to the community.

The beautiful cast iron signpost in Withiel has been causing concern for some years as its condition continues to deteriorate. It is rusting badly and the fingers have been replaced by inappropriate aluminium arms, one of which is drooping alarmingly. Cornwall Council, which is responsible for maintenance of the sign, prefers to spend its money elsewhere.

Responding to the invitation, Parish Clerk Robin Turner proposed to the programme makers, Ricochet Productions, that the suffering signpost would be an appropriate subject for The Repair Shop. The programme’s Associate Producer Ben King responded with unbridled enthusiasm. Merv Davey, the Grand Bard of Cornwall, who lives opposite the signpost and has made an exhaustive study of historic signposts in the area, was prepared to be fully involved in the making of the programme. Emails and phone calls flew back and forth. A filming schedule was proposed. Parish Council Chairman Janet Shearer, County Councillor Chris Batters and several County Council officers were involved in getting the required filming permissions, and a film team was sent to Withiel to interview Merv Davey and procure evocative footage of the beautiful village and its sorry signpost. With them came one of the programme’s repair experts, master craftsman Don Barker, who was expected to take away the top half of the signpost to begin repairs at the programme’s workshops in Chichester.

But after the filming had taken place, the idea was suddenly dropped. Assistant Producer Ben King wrote to the Parish Clerk saying the item had hit “a momentous bump in the road” and that while he personally loved the item, they would not be proceeding because of a “mixture of factors”. Furthermore, those involved would not be able to get further information from him as he was emigrating to Australia the following week. Councillor Shearer told the Parish Council that it seemed that the cost of the refurbishment had been beyond the means of the producers. Mr King had said in his final communication that if the programme was recommissioned by the BBC, it would probably be with “a larger pool of resources” and the Withiel signpost item might be resurrected.

Signposts apart, the February meeting noted the banking of a VAT refund of £182.86 and a Local Maintenance Partnership grant of £292. Councillor Cubitt reported progress on the Neighbourhood Development Plan, where responses had been received from statutory bodies and we could now move to the next stage – a meeting of the Steering Group was arranged for the following week. The Council noted the Cornwall Association of Local Councils position on the Local Government Boundary Commission report, which is due out in May. The Council also discussed a letter complaining of increased traffic through Ruthernbridge from vehicles carrying cyclists to the mountain biking track at Grogley and will monitor the situation.

The next meeting is on Wednesday March 1st at 7:15pm; all are welcome.

A long and lively Parish Council meeting covered a lot of ground on August 3rd; we welcomed a delegation from St Breock Parish Council, led by their Chairman Ray Jarrett, who sought our support to change the arrangement under which WREN, the Wadebridge Renewable Energy Network, administers the community fund from St Breock Down wind farm.

Mr. Jarrett was critical of WREN’s management of the wind turbine money, saying it was not cost-effective, the administrative fee of £10,000 was excessive, and WREN’s accounting and auditing procedures were not transparent END_OF_DOCUMENT_TOKEN_TO_BE_REPLACED

WITHIEL PARISH  COUNCIL NOTICE OF CASUAL VACANCY TO BE

FILLED BY CO-OPTION IN OFFICE OF PARISH COUNCILLOR

The Returning Officer of Cornwall Council has confirmed that the regulation 10 requests from electors have not been received and the Council can now fill the casual vacancy by co-option.

NOTICE is hereby given that pursuant to Rule 8 (3) of the Local Elections (Parishes and Communities) Rule 1986 the council will fill the casual vacancy by co-option.

The council may co-opt any person who is legally qualified to hold such office, and who is willing to serve provided they are a British citizen, or a citizen of the Commonwealth or the European Union, and are neither the subject of a bankruptcy restriction order or interim order or have, within five years before the day of the election, been convicted in the United Kingdom of any offence and have had a prison sentence (whether suspended or not) for a period of over three months without the option of a fine.

Provided the person also satisfies at least ONE of the following they may be apply.

• They are registered as a local government elector for the parish.

• They have during the whole of the preceding twelve months occupied as owner or tenant, any land or premises in the parish.

• Their principal or only place of work during the preceding twelve months has been in the parish.

• They have during the whole of the preceding twelve months resided in the parish or within 4.8 km of it.

They must also be 18 years or older on the day they become nominated for election.

Written expressions of interest from persons wishing to serve as a councillor need to be submitted to the Clerk of the council within 21 days of the date of this notice (excluding Saturdays, Sundays, Christmas Eve, Christmas Day, Good Friday and Bank Holidays).

The closing date for the written submission interest is 21st January 2016 and following that date the council will fill the casual vacancy by co-option.

Damage to the bridge at Ruthern once again exercised Withiel Parish Council at its November meeting. It has been proposed everyone who has an interest in, or authority over the bridge, should attend a meeting at the site; it should draw quite a crowd. The centre of the bridge forms the boundary between three parishes, Lanivet, St Breock and Withiel, while the County Council and an extraordinary array of NGOs like English Nature have a say over what can be done there. The Chairman, Councillor Shearer, said action had to be taken – the bridge had been hit half a dozen times in recent years, and repairs had cost us all tens of thousands of pounds. We can’t go on doing the same old thing, and expecting a different result.

September’s Parish Council meeting had something of a late-summer-holiday air – there was very little business to transact, with no new planning applications and no County Council planning decisions to report. Our Clerk, Robin Turner, was absent on holiday, as was Councillor Simon Coy, our Financial Officer, so the Financial Report was held over to the October meeting. County Councillor Chris Batters and PCSO Andrea Crocker also sent their apologies for absence.

We approved the payment of two cheques – £17.96 to the Cartridge Shop for printer supplies, and £120 to our auditors Grant Thornton. Our audits are usually free because our turnover doesn’t reach a certain threshold, but this year we handled £10,000 on its way from the Kerriers solar farm fund to the Village Hall, so END_OF_DOCUMENT_TOKEN_TO_BE_REPLACED

End of the year. That’s the estimate for when we’ll hear whether and how Withiel’s broadband problems are to be overcome. It seems that however much time passes the answer is six months off, but that’s what Superfast Cornwall’s Julian Cowans told the Bodmin Community Network Panel meeting in July.

Parish Councillors Janet Shearer and Pat Malone attended the meeting, in Blisland. We heard that the £131 million main phase of Superfast Broadband is winding up with 95 percent coverage for Cornwall. That leaves 30,000 households with primitive broadband or none at all, and END_OF_DOCUMENT_TOKEN_TO_BE_REPLACED

New concerns about the creep of industrialisation from the A30 towards Withiel were expressed at the July meeting of Withiel Parish Council, and in particular the storage of shipping containers in two places north of the old A30. Council members have received complaints about the containers, and a member of the public attended to voice concerns that they were unsightly and unsafe.

Parish Council Chairman Sue Kirkby has relinquished the Chair because of ill-health, and a tribute to her hard work by County Councillor Chris Batters drew loud applause from a dozen members of the public at the May meeting of the Council. Sue said she thought the stress of the chairmanship may prove too much for her, and Coun Batters praised the super job she had done since she took over the Chair in 2013. Sue will continue as a councillor, and will also work on the Neighbourhood Plan for Withiel, for which she has been largely responsible.

Janet Shearer was elected Chairman, with only Councillor Harper voting against, although he offered no alternative candidate. David Cubitt was unanimously elected Vice Chairman, while Councillor Nott-Bower agreed to take over END_OF_DOCUMENT_TOKEN_TO_BE_REPLACED

Withiel Parish Council’s April meeting was notable for raised voices and robust discussions of everything from wind turbines to ASBOs. The Council decided to express its opposition to the construction of a new wind turbine at St Wenn. During the discussion Councillor Malone produced documents showing that Cornwall Council had set aside £16 million and was applying to itself for planning permission to build wind turbines on its own land – something that had been described as “balderdash” by County Councillor Chris Batters at a previous meeting. In a frank exchange of views, Councillor Batters told Councillor Malone to take it up with Cornwall Council’s Chief Executive Andrew Kerr, who had told him (Batters) that such claims were “balderdash”.

A forceful exchange of views also arose when Councillor Harper requested that the text of a notice rescinding an ASBO be read out at the meeting. The Chairman, END_OF_DOCUMENT_TOKEN_TO_BE_REPLACED